TIME TO REMINISCE WITH HOWARD HEWETT, GUMP FICTION AND CHAIRMEN OF THE BOARD AT CIRCLE K SPEED STREET PRESENTED BY COCA-COLA 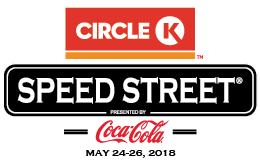 Commemorating the May races at Charlotte Motor Speedway with family-oriented events, the 600 Festival has drummed up Judah & the Lion, Chase Rice, Easton Corbin, Dustin Lynch and Brett Young to perform in uptown Charlotte May 24-26 for the 24th annual Circle K Speed Street presented by Coca-Cola.

Performing on the Coca-Cola stage at 8:45 p.m. will be one of Nashville’s most genre-bending bands, Judah & the Lion. Released in March 2017, “Folk Hop N Roll” is the group’s second full-length album featuring a new genre of music dubbed “Folk Hop.”  The album features RIAA-certified gold single, “Take It All Back,” which topped the Alternative radio charts at No. 1 for three consecutive weeks. Judah & the Lion were recently named iHeart Radio’s Best New Alt/Rock Artist at the 2018 iHeart Radio Music Awards.

Charlotte-based bands, Reaves and Jaggermouth, will open for the trio starting at 6:30 p.m.

It has been six years since Easton Corbin appeared on the Coca-Cola stage, and he’s been busy since. He has accumulated two No. 1 singles, seven top-10 singles and multiple awards and nominations. Corbin is known for his signature hits, “A Little More Country Than That,” “Roll With It,” “Lovin’ You Is Fun,” and “Baby Be My Love Song” from his No. 1 debut album, “About To Get Real.” His latest top-5 single was “A Girl Like You.”

Co-headlining Friday night will be country music singer and former NASCAR pit crew member, Chase Rice. The Tar Heel native released his sophomore album, “Lambs & Lions,” to critical acclaim late last year. Rice’s first album, “Ignite the Night,” debuted at No. 1 on the Billboard Top Country Albums and No. 3 on the all-genre chart and produced a pair of top-5 hits including the platinum-certified “Ready Set Roll” and “Gonna Wanna Tonight.”

Georgia native and singer-songwriter, Travis Denning will open for the country music stars starting at 6:30 p.m.

Headlining Circle K Speed Street presented by Coca-Cola on Saturday will be 32-year-old country star, Dustin Lynch. The Tennessee native has been on a steady path toward superstardom with five consecutive No. 1s, three top-5 albums, platinum-level certifications and tours with the biggest names in country music. One of RollingStone.com’s Most Anticipated Albums of 2017, his latest album “CURRENT MOOD” features chart-rising single “I’d Be Jealous Too,” No. 1 hit “Seein’ Red” and the record-setting “Small Town Boy,” which reigned the Billboard Country Airplay chart for four straight weeks in 2017, making it the chart’s longest-running leader of the year with the largest single-week audience. It earned Lynch his first iHeartRadio Music Awards nomination for Country Song of the Year.

With his honest lyrics and West Coast-meets-Southern sound, special guest Brett Young will capture the hearts of guests starting at 8 p.m. The newly-named 2018 ACM New Male Vocalist of the Year’s self-titled, gold-certified debut album features three platinum-certified No. 1 singles, “Like I Loved You,” “Sleep Without You,” and “In Case You Didn’t Know.” His current single, “Mercy,” is steadily climbing the charts and quickly hit No. 1 in its second week on the Vevo Top Country chart.

Rising star, Lindsay Ell, will take the stage at 6:30 p.m. performing songs from her debut album, “The Project.”

These concerts will take place in Romare Bearden Park all three nights.

In addition, fans can enjoy these family-friendly events in May including Movies on the Campus in conjunction with Jiggy with the Piggy in Kannapolis on May 4; the Zucchini 600 in Kannapolis May 5; Haulers on Union Parade and Fan Fest presented by Freightliner in Concord May 17; and the Little 600 at GoPro Motorplex in Mooresville May 22.

The event has been promoted and produced exclusively by CSM Production since 1996.