600 FESTIVAL TRADITION CONTINUES WITH ANOTHER EXCITING, ENTERTAINING MONTH OF MAY IN CHARLOTTE 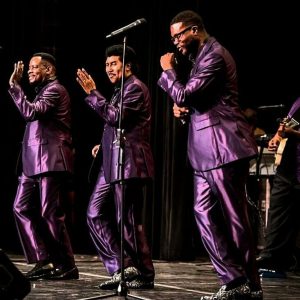 CONCORD, N.C. –The Chairmen of the Board, one of beach music’s most iconic bands, will add an air of musical fun to the Haulers on Union Parade & Fan Fest in downtown Concord on May 18.

Their performance will be part of an evening of family enjoyment anchored by the MONSTER Energy NASCAR Cup car haulers annual trip down Union Street on the way to Charlotte Motor Speedway for the All-Star race on May 20.

More than 30 of the colorful haulers are expected to parade down Union Street, part of an evening full of music, games, food vendors and more. There is no admission charge to the Haulers on Union Parade & Fan Fest.

Soulful music will bookend the hauler parade. The Entertainers, another beach music powerhouse, will open the event with a performance at 5:15 p.m. The Chairmen of the Board will perform following the hauler parade at 7 p.m. The night’s two free concerts will be held on a stage on Means Avenue in downtown Concord.

“The Haulers on Union Parade and Fan Fest is always an evening of great family fun,” said Jacqueline Gafrarar, the executive director of the 600 Festival. “It’s such an exciting event for race fans and the entire community. It’s the product of great community partnership by everyone involved.”

The Chairmen of the Board has long been a popular act in Concord, playing regularly in the area for decades. This will be the first time the group, which is a recently-named member of the North Carolina Music Hall of Fame, has performed in the area since retaining rights to its original name last fall.

The City of Concord, Cabarrus County, the Cabarrus County Convention & Visitors Bureau and Concord Downtown Development Corporation, partner with the 600 Festival Association to stage the event.

“We are excited about another year of Haulers on Union in Concord to kick off the spring race events on May 18, featuring Chairmen of the Board,” said Concord Mayor Scott Padgett. “Mark your calendars because there will be fun for fans of all ages, I look forward to seeing you on Union Street.”

The big rigs are expected to begin rolling at 6:15 p.m., starting at RideNow Powersports and traveling south the length of Union Street before heading to Charlotte Motor Speedway. Fans are asked to gather on Union Street between Cabarrus Avenue and Corban Avenue to view the hauler parade.

About the 600 Festival™ Association
The 600 Festival Association is a nonprofit that has been commemorating the May races at Charlotte Motor Speedway with spectacular, family-oriented events for more than 30 years. This year’s lineup of events includes Movies on the Campus in conjunction with Jiggy with the Piggy in Kannapolis (May 5); Haulers on Union Parade & Fan Fest in Concord (May 18); Little 600 at GoPro Motorplex in Mooresville (May 23); the PNC Speed Street 5K (May 25); and Circle K Speed Street presented by Coca-Cola in uptown Charlotte (May 25-27). For more information on the five 2017 600 Festival Association events, follow us on Facebook, Twitter @600festival and Instagram @600festival.